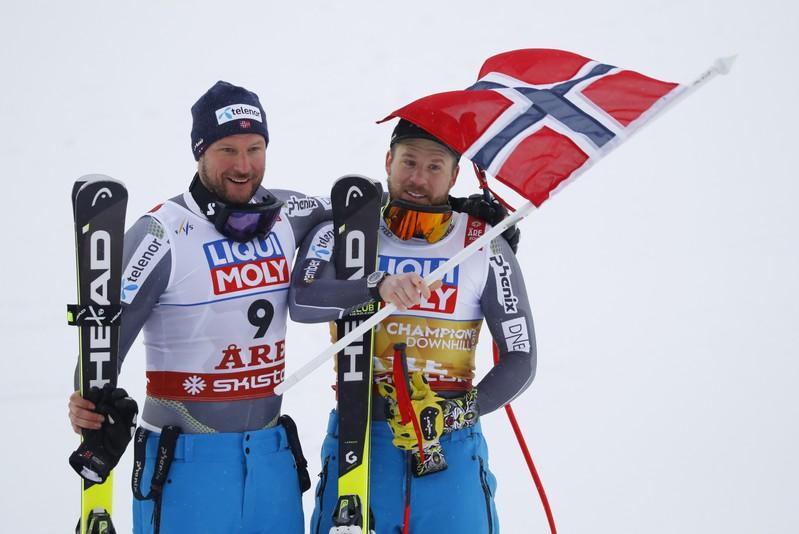 Are, Sweden (Reuters) – Kjetil Jansrud led a Norwegian one-two to win gold in a weather-hit men’s downhill at the Alpine skiing world championships on Saturday, denying team mate Aksel Lund Svindal a fairytale finish to his career by the narrowest of margins.

Jansrud, 33, made light of the falling snow and poor visibility to win by 0.02 seconds and claim a first world title, reversing the result at last year’s Winter Olympics when Svindal came out on top in the blue-riband event.

Svindal, who will end his glittering career after the championships, came agonizingly close to becoming the first man to win three downhill world titles but a small mistake in the closing stages of his descent probably cost the 36-year-old.

“I was ready today, it’s been an emotional couple of weeks and I wanted to get it over with,” Svindal, who has battled persistent knee injuries, said.

Austria’s Vincent Kriechmayr was third, 0.33 seconds back, to earn his second medal of the week after sharing silver with Johan Clarey in the Super-G.

After silver medals in combined and Super-G in the last two world championships, Jansrud, who has struggled in the speed events this season, finally made it one step further up the podium as he beat his great friend and rival.

“We’ve been lucky enough to share a few one-twos,” Jansrud said in the finish after Austrian Hannes Reichelt, the 45th starter despite wearing bib number one, failed to threaten to spoil the Vikings’ party.

“I had missed a (world gold) until now so that makes it bigger. Doing this in Aksel’s last race is a real honor. It’s a perfect day.

“I brought everything I had in my heart and mind today.”

The race had been delayed for an hour with low cloud at the top of the course but organizers decided to run it, on a lowered start, despite heavy snow falling throughout.

Super-G winner Dominik Paris, who came sixth, suggested the race should not have been run.

“It was tough with the weather,” the Italian said. “I’m happy for Aksel in his last race but maybe they shouldn’t have started today. It was foggy, then it started snowing hard and there was too much snow on the race line.”

Reichelt, one of the quickest in the training runs, had deliberately given himself a low starting place by not showing up for the bib ceremony, but his gamble backfired as he got snagged in some soft snow and lost time.

Switzerland’s Beat Feuz, who was bidding to become the first man to successfully defend the downhill world title since compatriot Bernhard Russi won in 1970 and in 1972, was fourth.