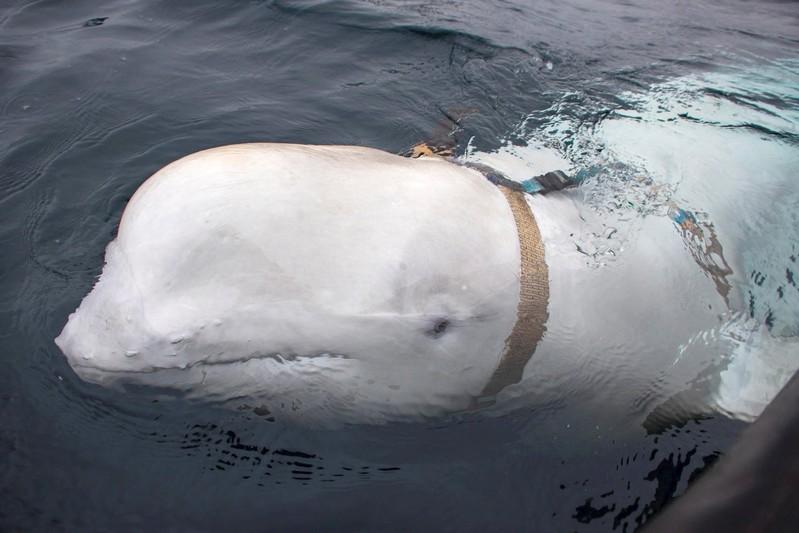 OSLO (Reuters) – A white beluga whale is loitering off the coast of northern Norway, and that is starting to worry Norwegians, who are afraid it might not be able to fend for itself. Also, it might be a spy.

A white whale wearing a harness is seen off the coast of northern Norway, April 29, 2019. Jorgen Ree Wiig/Sea Surveillance Service/Handout/NTB Scanpix via REUTERS

The whale first showed up a few weeks ago when it swam up to Joar Hesten’s fishing boat. Hesten got in touch with the authorities, who were interested, because Hesten was off the northern coast and whales don’t often show up there this time of the year.

“We asked him if he could just try to have it around his boat until we arrived,” Joergen Ree Wiig, an inspector at the Norwegian Directorate of Fisheries, said on Tuesday. That wasn’t hard, it turned out.

Hesten and Wigg obliged, and then they turned the harness over to the police, because the nearest St. Petersburg to Norway is in Russia. The thought occurred to people that they might have some kind of Russian spy whale on their hands. The harness held a camera mount, so the thought was not entirely outlandish.

On the other hand, it didn’t entirely make sense, either. The lettering on the harness was in English, not Russian, and used the Roman alphabet, not Cyrillic. It seemed unlikely the Russians wanted to make it easier for Westerners to identify any of their lost spy whales.

On yet another hand, Russia does have spy whales, although it’s not claiming this one just yet.

“We have restarted training of military dolphins …,” said Colonel Viktor Baranets, a Russian military expert. “Their tasks remain the same. As to the use of common bottlenose dolphins, for instance, or beluga whales, I was told in the Sevastopol dolphinarium that these animals are not used (at the Russian Black Sea naval base) in Sevastopol.

“As to Russia’s North … I was told that Russian scientists are using beluga whales for tasks of civil information gathering, rather than military tasks.”

Exactly what the difference might be, the colonel didn’t say. In any case, the Norwegian police security service, PST, took custody of the harness, presumably to try to track down its origin.

“They collected it from me an hour ago. They said they would look into it,” Wiig said. PST did not immediately reply to a request for comment.

Wiig’s Fisheries Directorate is more now concerned about how the whale will make out. It shows no inclination to go home, wherever that might be.

“The beluga whale has been spotted again in the area. We are very concerned that it is not able to feed itself,” he said, adding that the animal’s behavior suggested it may have been tamed.

The Directorate is considering whether to take further action to help it, Wiig said. “What we want to avoid is a ‘Keiko’ situation.”

A white whale wearing a harness is seen next to a fishing boat off the coast of northern Norway, April 29, 2019. Jorgen Ree Wiig/Sea Surveillance Service/Handout/NTB Scanpix via REUTERS

Keiko was an orca who had been captured and tamed and starred in the 1993 Hollywood movie “Free Willy”.

He was set free off Iceland in 2002, and visitors would come from far afield to spot him in a particular fjord on Norway’s northwest coast.

But things did not go well. Keiko was unable to re-adapt to the wild, and died off the coast of Norway in 2003.