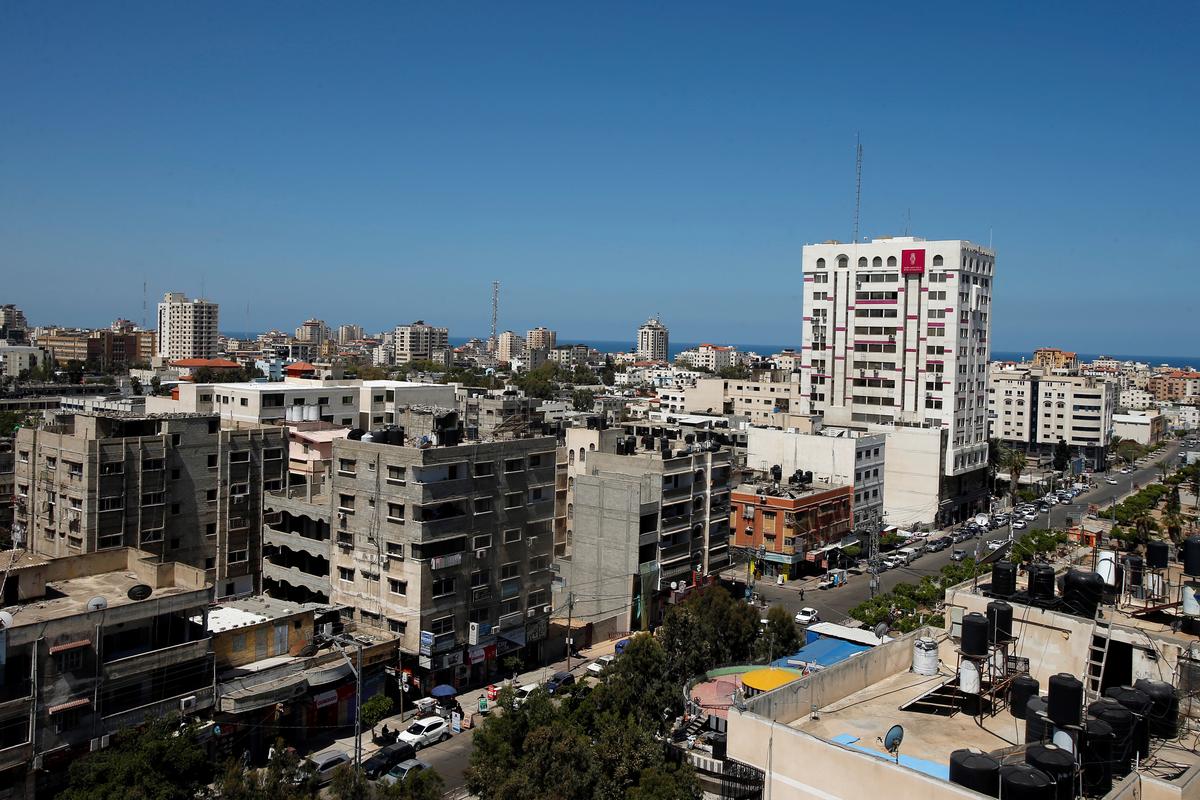 JERUSALEM/GAZA (Reuters) – Gaza militants fired dozens of rockets into Israel on Saturday and an Israeli air strike killed one Palestinian as hostilities flared across the border for a second day.

A view shows buildings in Gaza City May 4, 2019. REUTERS/Suhaib Salem

Israel hit the enclave with air strikes and tank fire after Palestinian militants fired more than 90 rockets toward Israeli cities and villages, the military said.

The Gaza Health Ministry said the dead Palestinian man was 22 years old. It was not immediately clear if he was a militant or a civilian.

Israeli Prime Minister Benjamin Netanyahu will convene security chiefs on Saturday to discuss the situation, a source in his office said.

On Friday, two militants from the Islamist Hamas group that governs Gaza were killed in an Israeli air strike. The Israeli military said Friday’s strike was a retaliation for gunfire from Gaza that had wounded two of its soldiers near the border.

Gaza health officials said two other Palestinians shot by Israeli troops on Friday while taking part in weekly protests along the border died of their wounds. The Israeli military said some 5,200 Palestinians had amassed along the frontier. It did not immediately provide further comment.

“The resistance will continue to respond to the crimes by the occupation and it will not allow it to shed the blood of our people,” Hamas spokesman Abdel-Latif al-Qanoua said in a statement on Saturday. He made no explicit claim for Hamas firing the rockets.

One of the attacks was claimed by the Palestinian Democratic Front for the Liberation of Palestine (DFLP), which said it fired rockets at the Israeli city of Ashkelon.

The Israeli military said that its air and tank strikes targeted rockets launchers and Hamas posts.

Gaza health officials said four Palestinian bystanders were wounded in one of the Israeli strikes. There were no reports of Israeli casualties as rockets alerts sent residents running to shelters.

The Palestinian Education Ministry said it was evacuating schools in areas under Israeli bombardment.

Egyptian mediators, credited with brokering a ceasefire after a Hamas rocket attack north of Tel Aviv in March triggered a burst of intense fighting, have been working to prevent any further escalation of hostilities.

Hamas said in a statement on Thursday that its Gaza chief, Yeyha Al-Sinwar, had traveled to Cairo for talks on efforts to maintain calm along the border and alleviate hardship in the enclave.

Some two million Palestinians live in Gaza, whose economy has suffered years of blockades as well as recent foreign aid cuts. Unemployment stands at 52 percent, according to the World Bank, and poverty is rampant.

Israel says its blockade is necessary to stop weapons reaching Hamas, which has fought three wars with Israel in the past decade.

Reporting by Maayan Lubell and Nidal al-Mughrabi in Gaza; Editing by Gareth Jones and John Stonestreet