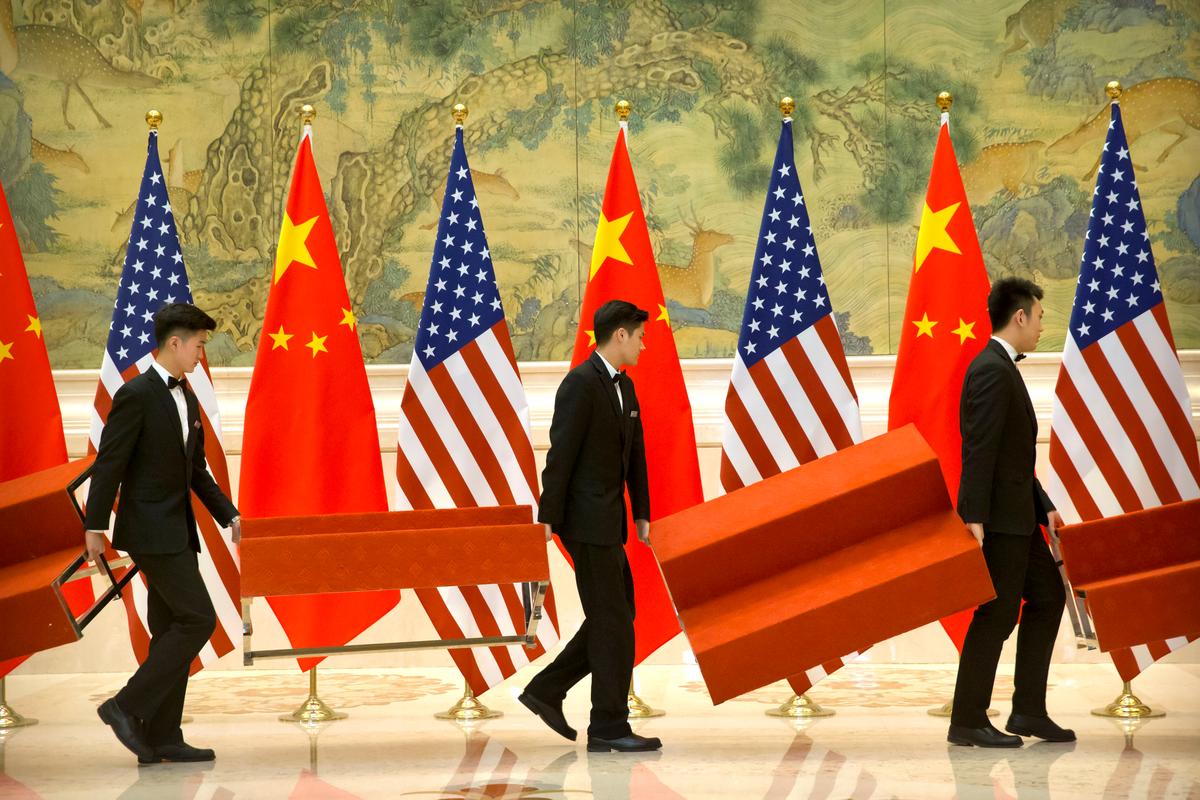 WASHINGTON (Reuters) – President Donald Trump on Sunday dramatically increased pressure on China to reach a trade deal by announcing he will hike U.S. tariffs on $200 billion worth of Chinese goods this week and target hundreds of billions more soon.

FILE PHOTO: Aides set up platforms before a group photo with members of U.S. and Chinese trade negotiation delegations at the Diaoyutai State Guesthouse in Beijing, China, February 15, 2019. Mark Schiefelbein/Pool via REUTERS/File Photo

The announcement via Twitter marks a major shift in tone from Trump, who has cited good progress in the talks and praised his relationship with Chinese President Xi Jinping. Any sign of an escalation in the months-long trade war is almost sure to roil financial markets, which have reacted sensitively to developments in the talks between the world’s two largest economies.

Trump’s announcement comes ahead of another round of talks between U.S. and Chinese officials in Washington scheduled for this week. White House officials were unaware on Sunday afternoon whether the tweet would affect those talks. The Chinese delegation could decide not to come because of what is likely to be seen as an escalation by the president.

Trump’s move is a reversal of his decision in February not to increase tariffs from 10 percent to 25 percent on $200 billion of goods, thanks to progress in the trade talks. That increase will now go into effect on Friday, Trump said in a tweet.

The president also said he would target another $325 billion of Chinese goods with 25 percent tariffs “shortly” and he suggested that the measures were not leading to price increases for American consumers.

“The Tariffs paid to the USA have had little impact on product cost, mostly borne by China. The Trade Deal with China continues, but too slowly, as they attempt to renegotiate. No!” Trump said.

Tariffs on Chinese goods are paid to the United States by the companies importing the goods; most of those companies are U.S.-based.

The announcement casts doubt on expectations that China and the United States were closing in on a deal to end a trade war that has slowed global growth and disrupted markets.

Chinese Vice Premier Liu He was due to travel to Washington for talks this week after a round last week in Beijing that Treasury Secretary Steven Mnuchin called “productive.”

As recently as Friday, Trump said talks with China were going well.

White House economic adviser Larry Kudlow told Fox News that the president’s tweet was a warning to the Chinese.

“The president is, I think, issuing a warning here, that, you know, we bent over backwards earlier, we suspended the 25 percent tariff to 10 and then we’ve left it there. That may not be forever if the talks don’t work out,” he said.

But Michael Pillsbury, an informal trade adviser to Trump and the director for Chinese strategy at the Hudson Institute, said Kudlow’s remarks downplayed the president’s intent.

“I take the president’s tweet at face value. I was disappointed that Larry Kudlow downgraded it to a mere warning, which may tend to undermine American credibility as the Chinese delegation prepares its position” ahead of this week’s scheduled talks, he said.

FILE PHOTO: Chinese and U.S. flags are set up for a meeting during a visit by U.S. Secretary of Transportation Elaine Chao at China’s Ministry of Transport in Beijing, China April 27, 2018. REUTERS/Jason Lee/File Photo

Despite Mnuchin’s more upbeat interpretation of the last negotiating round, Pillsbury said he assumed Trump’s tweet came after a more sobering update from U.S. Trade Representative Robert Lighthizer, including information that China had walked back from some things to which it had previously agreed.

Last week, industry sources said they believed the talks were in the endgame, and Mnuchin had said he hoped that the U.S. negotiating team would soon be able to recommend a deal to Trump or tell him that one could not be reached.

The administration has been insisting on a mechanism to ensure that China follows through on any promises to purchase more American goods. Administration officials have said both sides are expected to launch new enforcement staffs to police the agreement.