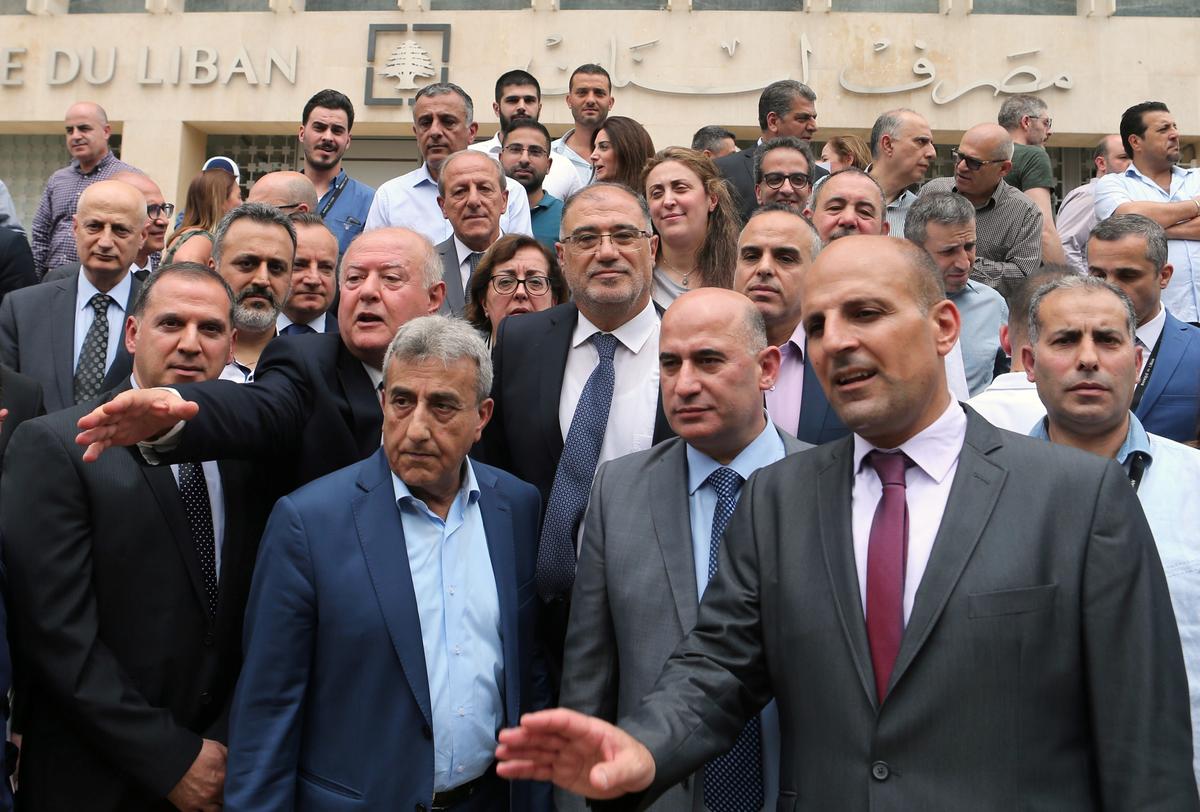 BEIRUT (Reuters) – Lebanese central bank employees went on strike on Monday over state budget proposals that would cut their benefits but Prime Minister Saad al-Hariri said failure to pass a “realistic” budget would be like a “suicide operation” against the economy.

Employees of the Lebanese central bank gather during a strike over state budget proposals that would cut their benefits, in front of the central bank in Beirut, Lebanon May 6, 2019. REUTERS/Mohamed Azakir

Hariri said he expected a resolution of the row at the central bank on Tuesday but criticized a wave of “preemptive” strike action over the draft austerity budget, adding that the government was taking measures to avoid economic collapse.

“We can’t continue in this situation and that doesn’t mean we will collapse tomorrow,” Hariri said, adding that Lebanon was “far from bankruptcy”.

He was speaking after a meeting with President Michel Aoun and Parliament Speaker Nabih Berri, which a senior official said aimed to give extra political support to the government in the face of the protests and strikes over the draft budget.

Saddled with one of the world’s heaviest public debt burdens, the government is debating a draft 2019 budget which Hariri has said may be the most austere in Lebanon’s history. Druze leader Walid Jumblatt threw his weight behind the plan on Monday, calling it “better than suicide”.

The public sector wage bill is the state’s biggest expense, followed by the cost of servicing the public debt. Army retirees have been among the opponents of the draft budget, which they fear may target some of their benefits.

The strike by central bank workers prompted the Beirut Stock Exchange to suspend trading until further notice on Monday because the clearance and settlement process for transactions could not be done on time, it said in a statement.

Syndicate head Abbas Awada, in an interview with the broadcaster al-Jadeed, said a decision on next steps would be taken at their general assembly meeting on Tuesday, but said they may take “a positive decision” to relieve the situation.

He warned that if the budget was passed without addressing their concerns “we will proceed in an open strike”.

Hariri warned in a statement earlier of “legal consequences” for strikers who jeopardized work at state institutions.

Central bank governor Riad Salameh had earlier convened a meeting with central bank employees where it was agreed to open Lebanese pound pricing operations against foreign currencies and to reopen financial transfers, the state-run National News Agency reported. The pound is pegged against the U.S. dollar.

Speaking after his meeting with Aoun and Berri, Hariri said he expected the government to approve the budget on Friday, Saturday or Sunday after which it would go to parliament. Once the government had approved it, Hariri said international institutions would raise their sovereign ratings for Lebanon.

Finance Minister Ali Hassan Khalil has said the draft budget involves “wide reductions” in spending based on the need for “exceptional austerity measures”.

The aim is a deficit of less than 9 percent of gross domestic product, compared to 11.2 percent in 2018.