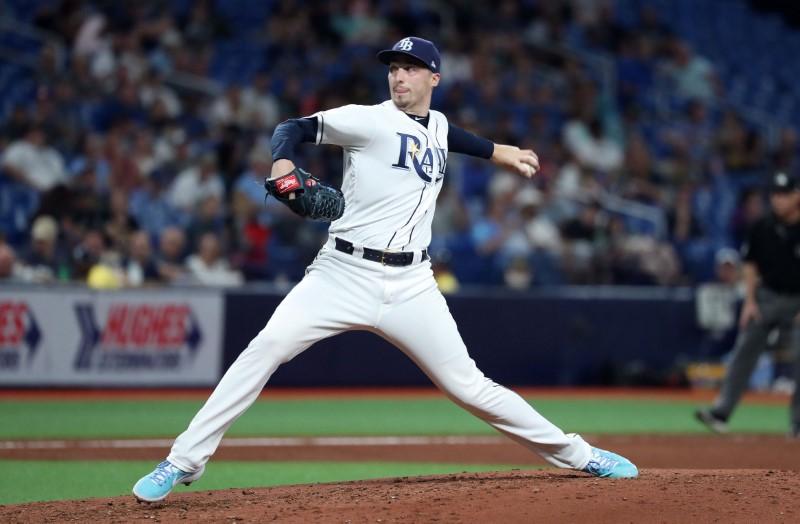 Snell (3-3) was perfect through 5 2/3 innings before Ildemaro Vargas hit a sharp single between third base and shortstop. The left-hander hit the next batter, Tim Locastro, before getting Ketel Marte to ground out to end the inning.

Snell struck out nine and walked none in six innings, leaving with a 7-0 lead. The reigning American League Cy Young Award winner had lost his previous two starts, lasting a total of 6 1/3 innings, after coming off the 10-day injured list following his recovery from a broken toe in his right foot.

Pham’s slam in the second inning staked Snell to a 6-0 lead. Avisail Garcia went 3-for-4 and drove in the final runs with a two-run blast to center in the eighth off Diamondbacks catcher John Ryan Murphy, making his second appearance of the season on the mound.

Matt Carpenter and Paul DeJong also slugged homers for St. Louis, which improved to 13-4 at home. Mikolas (4-2) faced just one hitter over the minimum while winning for the third time in his past four starts. He gave up three hits, struck out five and walked none.

Philadelphia had just one at-bat all night with a runner in scoring position. Phillies right-hander Vince Velasquez (1-2) served up all three homers and allowed five runs and four hits in four-plus innings. Phillies slugger Bryce Harper went 0-for-4 with two strikeouts to drop his average to .226.

The Nationals sat on the airport tarmac for nearly eight hours in Philadelphia after their game Sunday against the Phillies. The team returned to its hotel for a few hours, left Philadelphia about 10 a.m. ET and arrived in Wisconsin about seven hours before the first pitch.

Then in the game, the Nationals lost catcher Yan Gomes and left fielder Andrew Stevenson to injuries. On top of that, Washington had just five hits and committed four errors in losing its ninth in 12 games.

Robinson Chirinos’ two-run homer in the sixth inning allowed Houston to retake the lead, and the Astros held on to beat visiting Kansas City in the opener of the three-game series.

Carlos Correa had three hits, including a solo home run, and George Springer doubled, homered and drove in two runs for the Astros, who have won three in a row. Houston right-hander Gerrit Cole (3-4), who leads the majors with 74 strikeouts, fanned nine and didn’t walk a batter.

Luke Voit hit one of three home runs off Felix Hernandez as New York opened a four-game series against Seattle.

Brett Gardner went deep and rookie shortstop Thairo Estrada hit his first career homer to help the Yankees improve to 14-5 in their past 19 contests.

Seattle, which got home runs from Domingo Santana and Dee Gordon, fell to 6-16 in its past 22 games after opening the season with a 13-2 record. The Mariners lead the majors with 70 homers.

The slam was the second of Villar’s career and Baltimore’s first this season. Means (4-3) gave up one run on three hits in his seven innings.

Perez (5-0) held the Blue Jays to two hits and two walks in seven innings. Castro had two hits and three RBIs, while Polanco and Nelson Cruz each had three hits in the opener of a three-game series. Castro left the game in the ninth inning due to a bruised right elbow after being hit by a pitch in the eighth.

Toronto’s Marcus Stroman (1-5) lasted 4 2/3 innings, allowing eight hits, two walks and six runs (five earned) while striking out two. Blue Jays manager Charlie Montoyo was ejected for the first time as manager in the bottom of the fifth after Brandon Drury was called out on strikes.

James McCann added a solo homer for the White Sox, and Leury Garcia had three hits. Nova (1-3) allowed a run on eight hits and a walk. He struck out five.

Indians starter Trevor Bauer (4-2), who expressed concern about his walk totals after surrendering 10 in his past two starts combined, issued only one in five innings and hit a batter. However, he gave up a season-high eight runs (seven earned) and a season-high-tying 10 hits.

Rosell Herrera, Miguel Rojas and Martin Prado drove in runs in the top of the ninth inning, and Miami rallied for over host Chicago.

Jon Berti homered and Brian Anderson and Starlin Castro knocked in one run apiece for Miami, which snapped a three-game losing streak and won for only the second time in its past nine contests.

Anthony Rizzo hit a two-run home run and Kris Bryant clubbed a solo home run to lead Chicago. The defeat snapped a seven-game winning streak for the Cubs, who entered the game with 16 wins in their past 20 contests.

Paddack (3-1) went a career-long 7 2/3 innings while throwing a career-high 91 pitches. He gave up four hits and a walk with a career-high 11 strikeouts while lowering his ERA to 1.55. DeGrom (2-4) surrendered two runs on four hits over seven innings.

Renfroe, who Sunday afternoon hit the first pinch-hit, walk-off grand slam in Padres history to beat the Dodgers, finished with a homer and a double Monday. Eric Hosmer added a two-run double.

Walker Buehler matched a season high with eight strikeouts, and Chris Taylor had a pair of RBI hits as Los Angeles beat Atlanta for its eighth consecutive victory at Dodger Stadium.

Justin Turner added two hits and Corey Seager scored two runs as the Dodgers improved to 13-4 in their own park, where they have not lost since dropping a 5-0 decision to the Milwaukee Brewers on April 13.

Freddie Freeman and Nick Markakis hit home runs for the Braves, who were coming off a three-game sweep at Miami over the weekend.

Nick Senzel led off the first and second innings with home runs, and Jose Iglesias equaled his career-high with four RBIs, helping host Cincinnati salvage a split of its four-game series against San Francisco.

Eugenio Suarez also homered for the Reds, who blasted 15 home runs in the four games and led all four by at least four runs despite only recording two wins. The two-homer day Senzel gave the rookie three home runs in just four big-league games.

The Giants, who rallied from 8-0 and 4-0 deficits for wins earlier in the series, got within 7-4 in the sixth on a three-run home run by Pablo Sandoval, his third of the season. Brandon Belt scored twice for San Francisco.