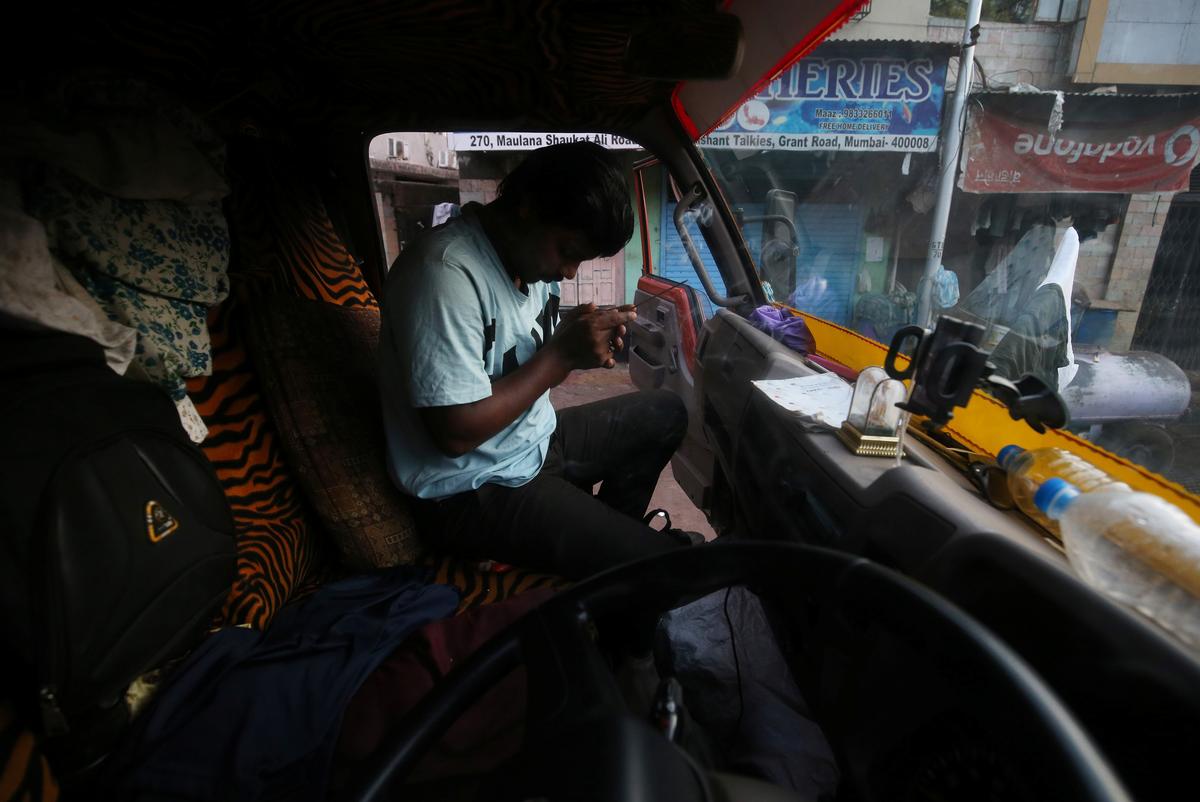 MUMBAI/NEW DELHI (Reuters) – In 2016, Rajesh Raut started driving an Uber taxi in Mumbai, hoping he could earn more than the $215 he received each month for making flatbreads at a roadside stall.

Rajesh Raut, a former Uber driver, prays inside the truck that he currently drives and lives in, at a street in Mumbai, India May 2, 2019. Picture taken May 2, 2019. REUTERS/Francis Mascarenhas

Thanks to attractive cash incentives offered as Uber lured drivers in one of its biggest markets outside the United States, Raut’s monthly earnings jumped to $1,280. He managed his car loan and home rent with ease, and sent more money than before back to his family in a village in eastern India.

But as Uber slashed incentives, Raut’s earnings dwindled swiftly. His income dropped to about $540 a month this year and he defaulted on his taxi loan payments. Deciding after an accident that he couldn’t afford to fix the vehicle, he quit Uber and now his monthly income, from a new job driving a truck, has crashed to $200.

“There is no benefit in driving for Uber … my life was much better just as a cook,” said 26-year-old Raut.

Former Uber India executives say incentives were sharply cut in early 2017 because of growing pressure from the U.S. head office to improve financial performance ahead of an initial public offering (IPO), which values it at as much as $90 billion. Uber is set to debut on Friday on Wall Street.

In interviews in the metropolises of Mumbai, New Delhi and Bengaluru, more than 35 drivers said discontent against Uber was growing.

Mounting debt from taxi loans was a key concern. Many drivers took loans to buy cabs, while some leased cars from the companies themselves.

To be sure, many drivers from Uber are still earning more than they could get in other blue-collar jobs in India. The national minimum wage in India is only about $2.50 a day.

“It’s not that we are making a fortune, but it does give us a livelihood,” said Prakash K.C., who earns around 38,000 rupees ($548) a month driving an Uber in Bengaluru city.

Uber has acknowledged the risk of unhappiness among its drivers. “As we aim to reduce driver incentives to improve our financial performance, we expect driver dissatisfaction will generally increase,” it said in its IPO filing.

DOUBLING DOWN ON INDIA

Uber currently operates in 40 Indian cities and the country accounts for an estimated 11 percent of its global rides.

Uber said last year it would double down on India investments after it sold its Southeast Asia business to Singapore’s Grab Holdings. Grab does not operate taxis in India.

Uber started its India operations in 2013, three years after local rival Ola launched a ride-hailing service. Both are backed by Japan’s Softbank Group Corp. Ola, which operates in 125 cities in India, last year said it plans to go public in four years.

Both gave attractive cash incentives to drivers and offered very low fares to riders when they started operations.

It wasn’t uncommon for Uber drivers to boast of monthly earnings of 100,000 rupees, which is the typical salary of a junior multinational executive in the country.

There were perks too. In a January 2017 company video, Uber drivers are seen entering a luxury hotel in northern Chandigarh city, where guards open their taxi doors and welcome them. Sitting and smiling with their families in a large hall with chandeliers, some of the drivers receive prizes such as an Apple iPhone, holiday package and a car.

In early 2017, the company slashed incentives by around 30 percent overnight, said three former Uber India executives, who declined to be named.

That came at a time when prices of diesel, used in many taxis in India, surged by about 30 percent.

One of the former Uber executives told Reuters the company should have taken more care as drivers were its most important stakeholder. The decision to cut incentives sharply had disappointed several members of Uber’s India team back then, the executive added.

Last October, hundreds of drivers went on strike in Mumbai and New Delhi, demanding higher fares to meet rising fuel costs. Drivers say they ended the strike as taxi firms assured some fare concessions, but more needs to be done.

Some Uber drivers in the United States and Britain have called for a strike on Wednesday in protest against what they call low pay.

An Uber spokesman told Reuters drivers were at the heart of its service and the company was committed to ensuring drivers get sustainable earnings, even though some were making less than they did three years ago.

“Uber continues to invest heavily in the well being of drivers and their families,” the spokesman said, adding it was helping them access life and health insurance, as well as loans.

Ola did not respond to a request for comment.

To mark its IPO, Uber says it plans to pay $300 million to more than 1.1 million drivers, a so-called “appreciation reward”. Qualified drivers in the United States, Uber said in its filing, will get $100 to $10,000 based on trips taken.

The Uber spokesman said thousands of drivers in India earned the reward, but did not provide an exact number. A driver in New Delhi showed his Uber app that said he had received an $84 reward, while another in the city, Arvind Kumar, received $165.

“There are a lot of troubles, this amount is nothing … all my dreams are broken,” said Kumar, who earns half the $1,432 per month he made five years ago. He said the drop in earnings had scuttled plans to provide his children with private-school education.