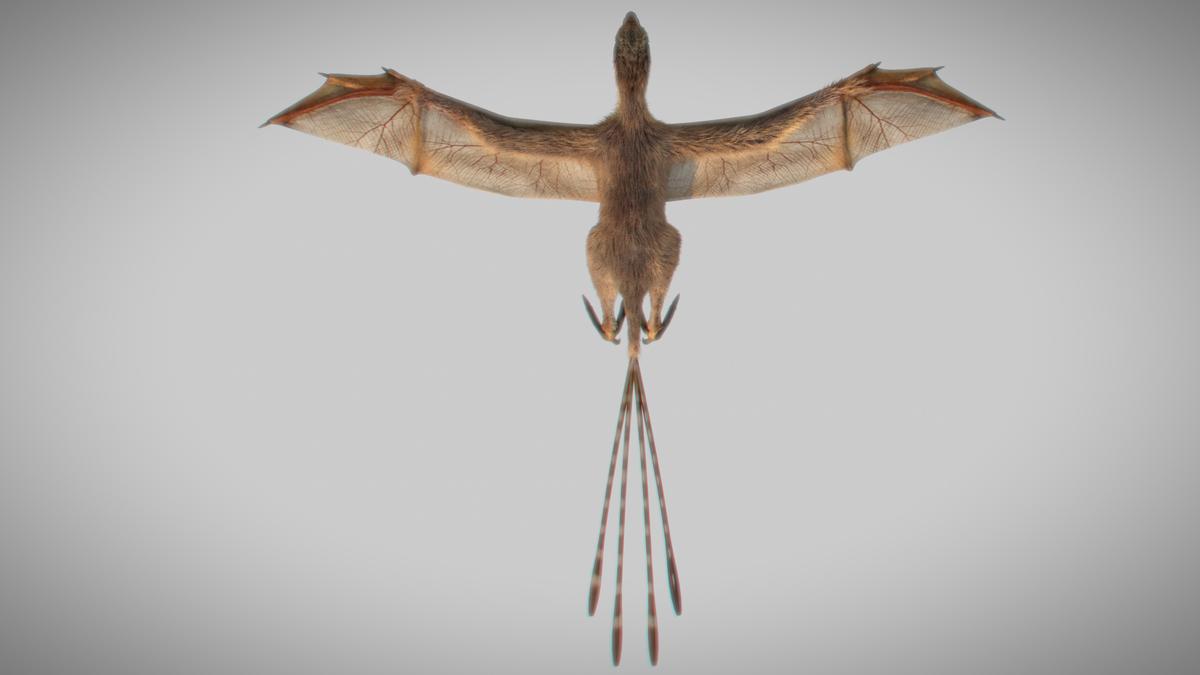 WASHINGTON (Reuters) – A fossil unearthed in northeastern China of a feathered dinosaur a bit bigger than a blue jay that possessed bat-like wings represents a remarkable but short-lived detour in the evolution of flight and the advent of birds, scientists said on Wednesday.

FILE PHOTO: A Jurassic Period dinosaur Ambopteryx longibrachium, which flew with bat-like membranous wings, is shown in this image of a 3-D reconstruction, released from Institute of Vertebrate Paleontology and Paleoanthropology, Chinese Academy of Sciences in Beijing, China on May 8, 2019. Courtesy Min Wang/Institute of Vertebrate Paleontology and Paleoanthropology/Chinese Academy of Sciences/Handout via REUTERS

The dinosaur, named Ambopteryx longibrachium, lived 163 million years ago during the Jurassic Period and took flight with membranous wings made of skin supported by a long, pointed wrist bone, dramatically different from the distinctive feathered wings of birds.

Before aviation pioneers Orville and Wilbur Wright flew the first successful airplane, others dabbled with various experimental flying machines. There was an analogous period of flight experimentation among dinosaurs before small feathered ones evolved into the first birds about 150 million years ago.

Its fossil, found in 2017 by a local farmer in Liaoning Province, was well preserved, boasting details of soft tissue like the wing membranes, bristly body feathers, stomach contents of its last meal and gizzard stones. It lacked the long, strong flight feathers characteristic of birds.

“The discoveries of Ambopteryx and Yi completely change our view about the origin of avian flight,” said paleontologist Min Wang of the Institute of Vertebrate Paleontology and Paleoanthropology, Chinese Academy of Sciences.

“For a long time, we thought feathered wings were the only flight apparatus” in the evolution of birds, Wang added. “However, these new discoveries clearly exhibit that membranous wings also evolved in some dinosaurs closely related to birds. Put together, the breadth and richness of the experimentation pertaining to flight is greater than was previously thought during the dinosaur-bird transition. And we may be seeing just the tip of the iceberg.”

Membranous wings in dinosaurs appear to have been short-lived experimentation, added Wang who led the research was published in the journal Nature.

Wang said Ambopteryx, about 13 inches (32 cm) long and about 11 ounces (306 grams) in weight, was certainly capable of gliding but it is difficult to know whether it could achieve powered flight. Likely omnivorous, Ambopteryx lived an arboreal lifestyle in a forested environment.

Reporting by Will Dunham; editing by Jonathan Oatis