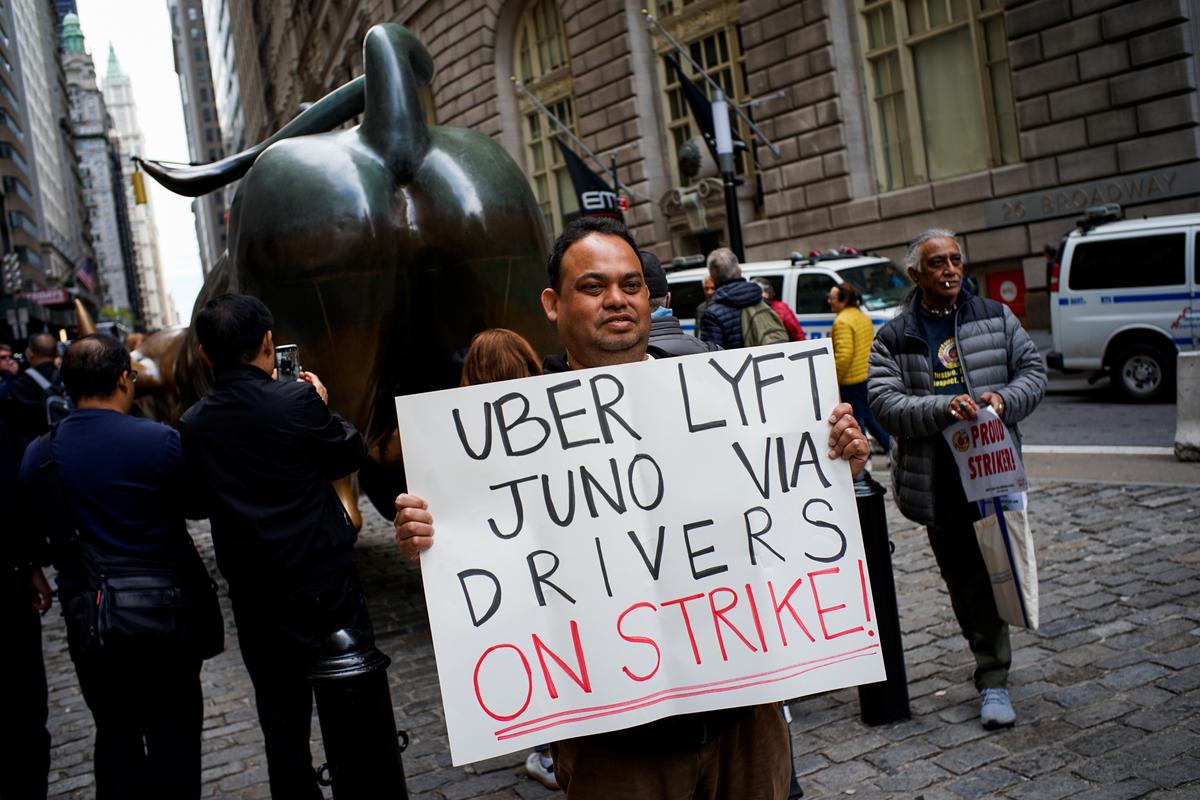 LONDON/SAN FRANCISCO (Reuters) – Uber drivers in London and major U.S. cities held a series of strikes on Wednesday to protest the disparity between gig-economy conditions and the sums that investors are likely to make in Friday’s blockbuster stock market debut.

Protests were sparsely attended in London, New York and California, and rides appeared easily available in some cities where strikes were called.

Drivers and regulators around the world have long criticized the business tactics of Uber Technologies Inc (UBER.N). The expected valuation of up to $90 billion in its initial public offering on Friday is proving to be the latest flashpoint.

Unions in Britain said support for the strike was strong, with drivers staying at home and passengers using the #UberShutDown hashtag to pledge solidarity on social media. The Uber app indicated fares were higher in London during a rainy morning rush hour due to increased demand.

“Stand with these workers on strike today, across the UK and the world,” said Jeremy Corbyn, the leader of Britain’s opposition Labour Party.

A few dozen protesters gathered at a rally in London. Another dozen attended a protest at about 9 a.m. EDT (1300 GMT) near Wall Street in Manhattan. At Uber’s headquarters in the borough of Queens in New York City, about 100 people gathered in the morning, but their numbers dwindled to a few dozen or so at 1 p.m., when a rally was scheduled. Uber has 3 million drivers globally.

Around a hundred people attended a rally in San Francisco, Uber’s home town. Driver and organizer Rebecca Stack-Martinez said that widespread media coverage made the strike a success, adding that organising in the gig economy of part-time, contract labour was difficult.

“There is no directory out there of who’s driving, how many drivers, how we can reach them,” she said. “And so we have to be really creative about how we get to drivers and get them involved in the movement.”

Many drivers work part time for the services and often divide their time between platforms, delivering food and goods as well as giving rides.

Drivers take part in a protest against Uber and other app-based ride-hailing companies in New York, U.S., May 8, 2019. REUTERS/Eduardo Munoz

The public calls for higher pay underscored that some drivers want more from Chief Executive Officer Dara Khosrowshahi, who was hired to help move the company past a series of scandals, improve driver relations and manage the IPO.

Uber is paying more than a million drivers about $300 million in one-time bonuses, for instance, and has changed policies such as allowing riders to tip.

“Whether it’s being able to track your earnings or stronger insurance protections, we’ll continue working to improve the experience for and with drivers,” the company said.

Uber has steadfastly, and mostly successfully, beaten back attempts to compel it to treat drivers as employees, arguing that its main business is a platform that brings riders and drivers together. And the money-losing company is under pressure to cut costs.

Syed Ali, an Uber driver and member of the striking New York Taxi Workers Alliance, in a statement said, “They have grown and grown and gotten richer and richer, but I haven’t grown with the company. My condition as an Uber driver has gotten worse and worse.”

Uber and Lyft have cut back on incentives and bonuses in more established markets to attract new drivers. They have also devised more complicated formulas for determining what riders pay and what drivers earn.

Both companies recently slashed the per-mile rate for drivers in Los Angeles and San Francisco, while increasing some other factors, such as per-minute rates. Some drivers estimated a loss of 10 percent to 20 percent in earnings.

The company and its critics are divided over how much drivers can make. Classified as independent contractors, they lack paid sick and vacation days and must cover their own expenses, such as car maintenance and gasoline.

U.S. representatives for Uber and Lyft did not respond to requests for comment Wednesday. Ahead of the actions, Lyft said its hourly wages have risen over the last two years and average over $20 per hour.