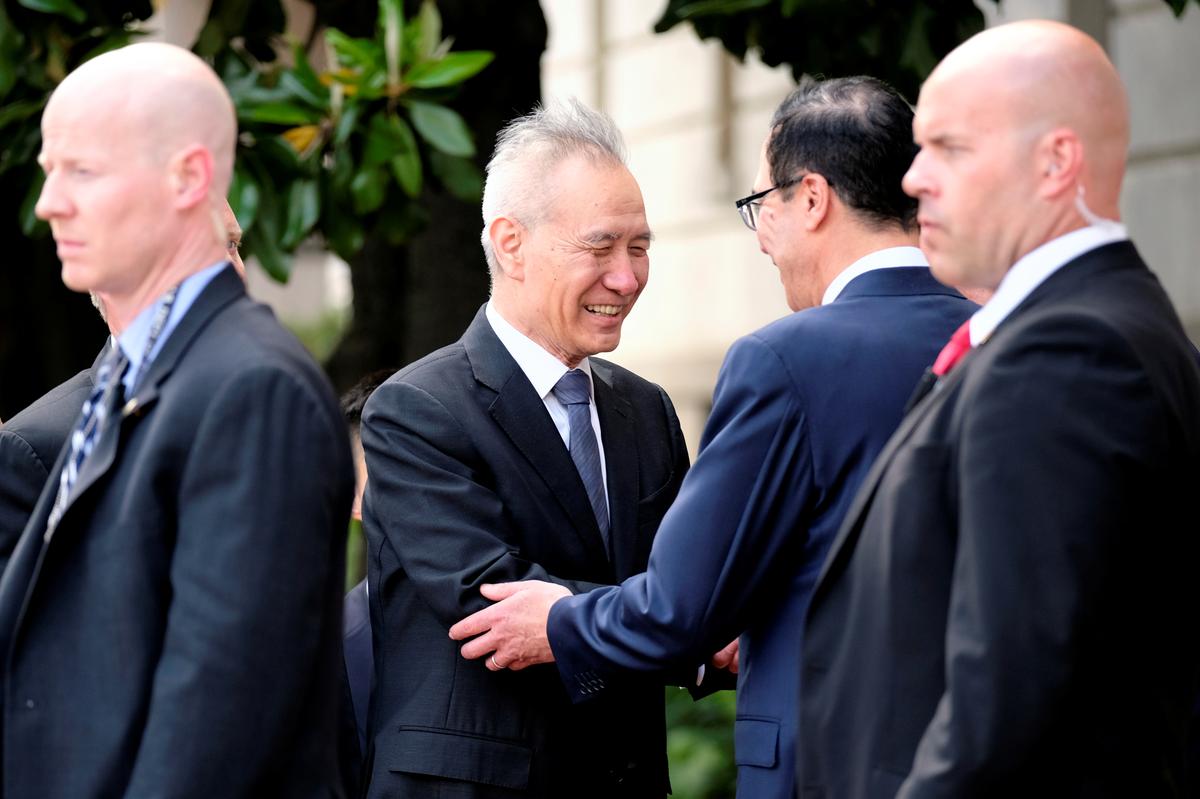 WASHINGTON (Reuters) – Top U.S. and Chinese trade negotiators concluded the first of two days of talks on Thursday to rescue a trade deal that is close to collapsing as Washington prepares to go ahead with plans to hike tariffs on hundreds of billions of dollars of goods imported from China.

Tension between Washington and Beijing has risen after a major setback in negotiations last week when China revised a draft deal and weakened commitments to meet U.S. demands for trade reform.

President Donald Trump responded by ordering a tariff hike, and China has said it would retaliate. The 10-month-old trade war has already cost companies in both countries billions of dollars.

Chinese Vice Premier Liu He, U.S. Trade Representative Robert Lighthizer and U.S. Treasury Secretary Steven Mnuchin talked for 90 minutes on Thursday and were expected to resume talks on Friday. Officials did not speak to reporters as they left the talks.

In comments to Chinese state media upon arriving in Washington, Liu said that hiking tariffs “is very disadvantageous to both parties”.

“We come here this time, under pressure, which shows China’s greatest sincerity, and want to sincerely, confidently, and rationally resolve certain disagreements or differences facing China and the United States. I think there is hope,” he said.

Before they get back around the table on Friday, the United States will have increased duties on $200 billion of Chinese goods, to 25 percent from 10 percent. The duties apply to cargoes leaving China after 12:01 a.m. EDT (0401 GMT) Friday.

Consumer products, including cell phones, computers, clothing and toys, are to be especially hard hit.

Trump on Thursday took aim at the $325 billion in Chinese goods that are so far untouched by the trade war, saying he was “starting … paperwork today” to tax those with a punitive tariff of 25 percent.

Trump, who has adopted protectionist policies as part of his “America First” agenda aimed at rebalancing global trade and boosting U.S. manufacturing, accused Beijing of reneging on commitments made during months of negotiations.

Trump said if the two sides cannot make a deal, the United States would go back to manufacturing products that China now makes. “It’ll be the old-fashioned way, the way we used to do it: We made our own product.”

Data released Thursday showed the U.S. goods trade deficit with China shrank to its smallest level in five years in March, which could further embolden Trump as he escalates the trade war with Beijing.

Plans by Washington to hike tariffs could cut China’s growth by 0.3 percentage points but the strengthening economy has become more resilient to external shocks, a Chinese central bank adviser said on Friday.

“The U.S. side has given many labels recently, ‘backtracking,’ ‘betraying,’ etc. … China sets great store on trustworthiness and keeps its promises, and this has never changed,” he told a news briefing in Beijing.

A source familiar with the talks said China’s changes to the language of the draft trade deal were so extensive it could take a month to fix them, assuming the United States rejects them.

The talks could still go several ways, a person close to the discussions said.

China could make some concessions to prolong talks even after tariffs and retaliation. The two sides could end negotiations, given they are so far apart. Or China could reverse the changes to the text and return the negotiations to where they were a week ago and work toward a deal to be signed at the G20 summit in Japan in June, the source said.

Reuters on Wednesday revealed the extent of the rift that has opened between the two countries, reporting that a draft trade agreement text sent by Beijing on Friday night was riddled with changes that marked reversals in Chinese commitments that undermined core U.S. demands.

The stripping of binding legal language from the draft struck directly at Lighthizer’s highest priority. The U.S. trade representative views changes to China’s laws as essential to verifying compliance after years of what U.S. officials have called empty reform promises.

Trump told supporters at a rally in Florida on Wednesday that China “broke the deal,” and vowed not to back down on imposing new tariffs on Chinese imports unless Beijing “stops cheating our workers.”