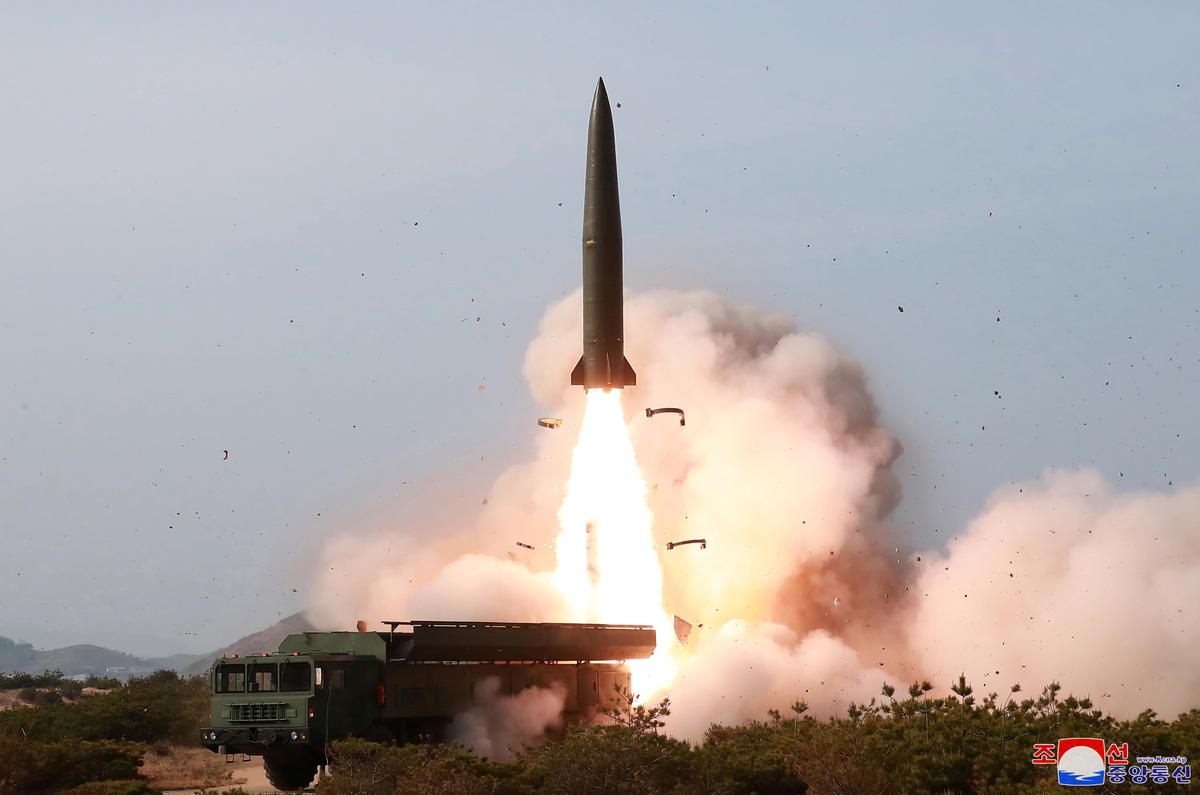 SEOUL (Reuters) – North Korea’s second missile test on Thursday signals it is serious about developing new, short-range weapons that could be used early and effectively in any war with South Korea and the United States, analysts studying images of the latest launches say.

FILE PHOTO: North Korean military conducts a “strike drill” for multiple launchers and tactical guided weapon into the East Sea during a military drill in North Korea, in this May 4, 2019 photo supplied by the Korean Central News Agency (KCNA). KCNA via REUTERS/File Photo

The tests have increased tensions after the last U.S.-North Korea summit collapsed in February in Hanoi with no agreement over Pyongyang’s nuclear weapons and ballistic missile program.

South Korean President Moon Jae-in said late on Thursday the launches seemed like a protest over the failed summit, while North Korea has defended the tests as routine and self defensive.

Some analysts say the multiple tests show the missiles aren’t only for political show.

“This second test solidifies that these launches are not just to stir the pot and elicit a U.S. response to resume negotiations,” said Grace Liu, one of a team of missile experts at the James Martin Center for Nonproliferation Studies (CNS) in California. “They are developing a reliable, operable missile that can defeat missile defenses and conduct a precision strike in South Korea.”

The U.S. and South Korean responses to the launches have been muted, with U.S. President Donald Trump and other officials emphasizing the missiles are not the large, intercontinental ballistic missiles (ICBMs) capable of reaching the United States.

But analysts said the military applications of the new missiles should not be underestimated.

“The Trump administration keeps downplaying these missiles because they are not ICBMs, but even though they can’t reach the U.S. mainland, it’s missiles like these that will start the war,” said Melissa Hanham, a weapons expert at Datayo, which tracks international security threats.

“They are small, easy to hide, easy to maneuver and you can’t tell what kind of warhead they are carrying. They could carry a nuclear weapon.”

The United States and South Korea field Patriot and THAAD missile batteries designed to shoot down various ballistic and cruise missiles, but their capabilities have been disputed.

While the origin of the North Korean missile remains unclear, a team of analysts at CNS told Reuters that Thursday’s test confirmed the missile is capable of maneuvering to elude defenses and protect its launch crew from detection.

“You can tell from the low apogee that this missile maneuvers a bit in boost to defeat missile defenses and aircraft hunting the launcher,” said Jeffrey Lewis of CNS.

Michael Duitsman, a rocket propulsion expert with the team, said North Korean state media photos of the launch show likely thrust vanes and steerable fins that guide the missile with precision and allow it to maneuver through much of its flight.

While Saturday’s missile was fired from a transporter erector launcher (TEL) vehicle with wheels, Thursday’s test featured a tracked vehicle.

Use of a tracked vehicle, which North Korea has more experience building, suggests it may plan to deploy a large number of the missiles and launchers, said Joshua Pollack, editor of The Nonproliferation Review.

“This seems to be their only mass-production option for highly capable TELs at the moment,” he said.

The missile uses solid fuel, which allows the weapon to be easily moved and fired more quickly than those using liquid fuel, analysts said.

In the end, the new missiles add a new level of unpredictability to an already tense situation, Hanham said.

“If North Korea pulls out (an ICBM) everyone knows it’ll be launched with a nuke,” she said. “These little missiles you don’t know, so it’s hard to be prepared.”

The new weapon’s maneuverability and low flying has led some South Korean officials to hesitate to label the weapon a “ballistic missile,” a weapon that would likely violate United Nations Security Council resolutions.

“Given its low altitude, more careful analysis is required,” said ruling party lawmaker Ahn Gyu-baek, citing military officials. “One should also be careful to not aggravate the situation with hasty actions.”

Ahn said South Korean military officials had assessed a number of potential political motives behind the missile launches. Those included increasing pressure for sanctions relief, and protesting Seoul’s military buildup including the purchase of new F-35 fighter aircraft as well as joint military drills by the United States and South Korea, which North Korea complained about in statements defending the tests.

The tests also likely held a message for domestic audiences designed to boost support for Kim’s government, he said.

FILE PHOTO: A missile is seen launched during a military drill in North Korea, in this May 10, 2019 photo supplied by the Korean Central News Agency (KCNA). KCNA via REUTERS/File Photo

“The Kim regime is determined to fight pressure with pressure,” said Leif-Eric Easley, a professor at Ewha University in Seoul. “It is threatening to raise regional tensions and create political problems for Moon and Trump if not offered economic concessions it failed to win in Hanoi.”

While Kim may not return to launching ICBMs or testing nuclear weapons immediately, he may seek other provocative ways to break the stalemate, Pollack said.

“Kim Jong Un has given the United States until the end of the year to rethink its approach,” he said. “But if they don’t get a meaningful response to these tests, maybe they’ll try to push the envelope further.”