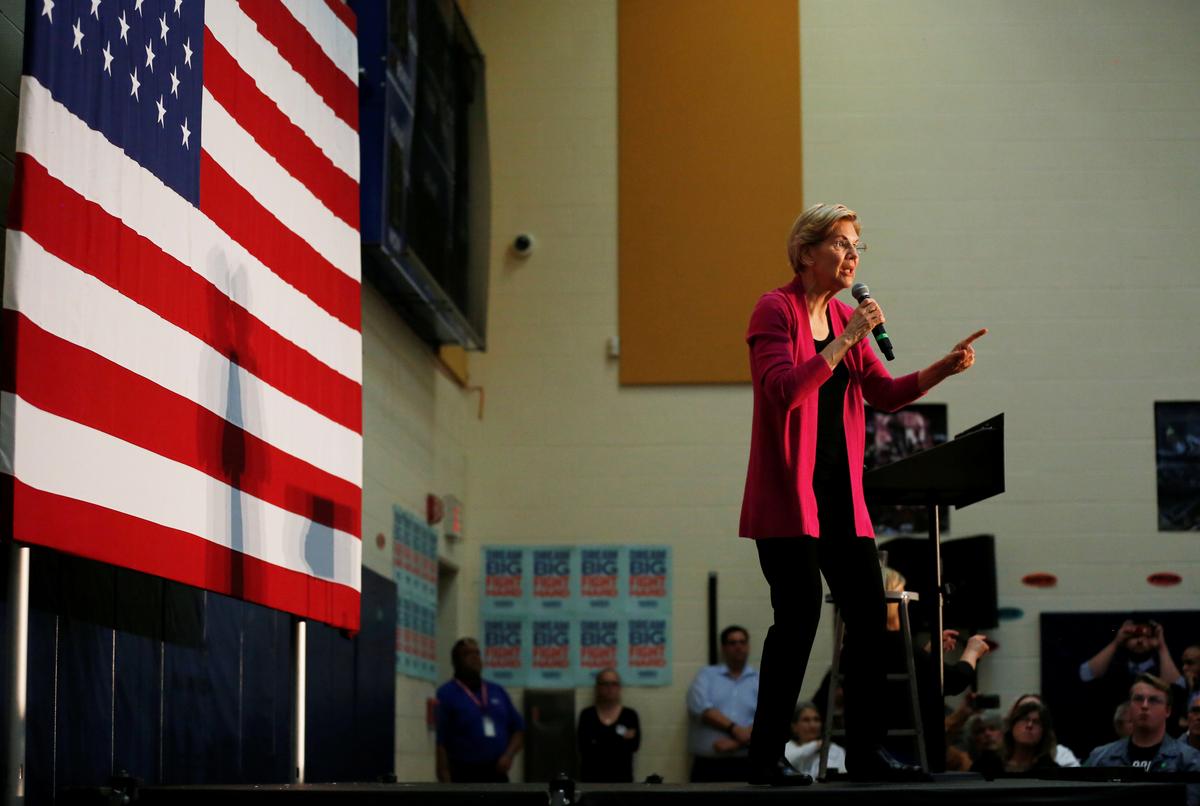 CHILLICOTHE, OHIO (Reuters) – At a veterans hall in the mostly white, working-class town of Chillicothe, Ohio, U.S. Senator Elizabeth Warren spoke to about 200 people on Friday about her plans to fight the opioid epidemic, Washington corruption and economic inequality.

Warren’s decision to campaign in Ohio – a state President Donald Trump won by eight percentage points in 2016 – so soon in the Democratic presidential nominating battle is telling.

Ohio does not host one of next year’s early nominating contests. Yet there is growing consensus among Democrats that a nominee’s ability to beat Trump in November 2020 is the number one priority – and Warren aims to convince voters there and elsewhere that she has broad enough appeal to do it.

Party strategists and voters are divided over what type of candidate is best positioned to take on the president.

Some believe it is critical to have a nominee who can win back the working-class, white voters who supported Barack Obama but then handed Trump victories in formerly blue states in the Midwest like Ohio, Michigan, Pennsylvania and Wisconsin. Others say a candidate who can drive turnout by appealing to young, minority and first-time voters is the best path to the White House.

Ed Rendell, a former Democratic governor of Pennsylvania, thinks moderate candidates like former Vice President Joe Biden or U.S. Senator Amy Klobuchar would be best at wooing back working-class voters in the non-urban areas of his state.

Warren’s progressive policies – she backs free college tuition, a wealth tax and Medicare-for-all healthcare – make her an “easy target” for Trump to accuse her of being a socialist, Rendell said.

But he agrees with other Democrats who say where candidates stand on the issues may not be the deciding factor for voters.

“I’ve never seen voters more single-minded than on the issue of beating Donald Trump,” Rendell said, adding he would work to win Pennsylvania for whoever emerges as the nominee.

In a Monmouth University poll of 987 likely Democratic primary voters conducted May 2-7 in New Hampshire, which hosts the second nominating contest, 68 percent said they would choose a candidate they did not agree with on most issues if the individual were a stronger candidate against Trump. Just 25 percent said they would pick the candidate they agreed with on most issues but who would have a hard time beating Trump.

Forty-nine percent of Democrats in an Ipsos online poll of 960 adults taken April 29-30 said the ability to beat Trump in the general election is the most important factor in choosing a primary candidate, ahead of policies on healthcare, jobs and the environment.

“Democrats view this not as a regular election but as an existential election for the country. The stakes are high. Each candidate is trying to show how they will take on Trump,” said Ben LaBolt, a former spokesman for Obama’s re-election campaign.

Ideally, a candidate will emerge like Obama who can appeal to a wide swath of Democratic voters, he said.

With just 3 percent of Democrats in the Ipsos poll picking Warren as the candidate most likely to beat Trump, the Massachusetts senator has work to do. Forty-six percent chose Biden as the strongest Trump opponent, and 25 percent said they did not know who was best positioned from the field of 22 Democrats running.

Ohio Democratic Party Chairman David Pepper rejected the idea that only a moderate Democrat can make inroads there. As a roadmap, he pointed to Senator Sherrod Brown’s re-election in 2018, when he won by a higher margin than in 2012 when Obama was on the ballot.

Brown, like Warren, focuses on themes of income inequality and creating an economy that protects and benefits middle- and working-class households. Pepper said that economic message resonates in rural and suburban areas, even if other parts of a candidate’s platform are more liberal than voters would typically support.

“These are the places that responded to Donald Trump saying ‘let’s make America great again,’” Pepper said of Chillicothe. “A ticket that includes that kind of candidate like Sherrod Brown’s did and can hold down losses in rural parts of the state and suburbs and energize our urban core – that combination is the ticket that will win Ohio.”

In largely rural Ross County, where Warren met with voters on Friday, Trump got roughly two-thirds of the vote in 2016.

But Chillicothe Mayor Luke Feeney, a Democrat, said the party should not count it out.

Retired teacher Kathleen Burgess, 70, was in the crowd. She said Warren’s early call to impeach Trump pleased her as a progressive voter, but she thought Warren’s economic policies also would appeal to swing voters in the state.

“By advocating for free public college and healthcare, those are kitchen table issues for working-class people,” Burgess said.