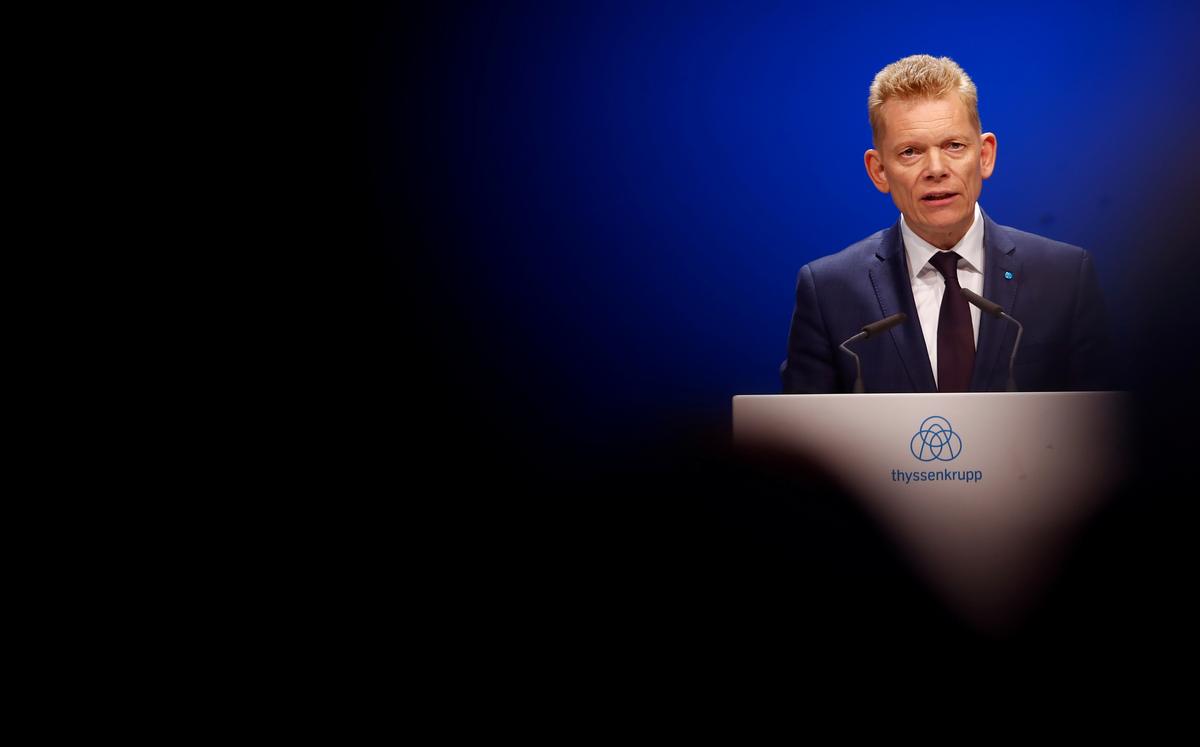 DUESSELDORF (Reuters) – Management and labor leaders at Germany’s Thyssenkrupp have agreed on a way forward after the industrial conglomerate announced a fresh restructuring drive that could lead to the loss of 6,000 jobs.

Agreement was reached in talks between management and workers overnight on recognizing the need for radical action, whilst ensuring fair treatment of employees at the Essen-based group, both sides said.

CEO Guido Kerkhoff announced the overhaul on Friday, ditching plans to split the business into two and abandoning a European steel merger with India’s Tata Steel.

The group will adopt a holding structure and plans to list its elevators unit, its most successful business.

The decision, first reported by Reuters, triggered a 28% recovery in Thyssenkrupp shares – their biggest daily gain – as Kerkhoff abandoned a cross-shareholding structuring that had ceased to be financially viable.

“Now it is up to shareholders to decide whether Thyssenkrupp steers towards a (viable) future, or towards conflict,” said Markus Grolms, deputy head of the Thyssenkrupp works council who represents the IG Metall industrial trade union.

Thyssenkrupp said in a statement the two steering committees of its supervisory board supported the new strategy, including the agreement with labor leaders, and recommended it be approved at a full board meeting on May 21.

“The executive board’s new strategy is to build a fundamentally new Thyssenkrupp,” the company said.

Group companies would be given freer rein to be more entrepreneurial and flexible, it added.

The agreement also won the backing of the regional leader of North-Rhine Westphalia, the industrial western state where Thyssenkrupp is based.

“Thyssenkrupp is showing the true meaning of social partnership and co-determination in this day and age,” Chief Minister Armin Laschet said after meeting Kerkhoff and Grolms.

“The concept that management and unions presented to me is convincing. It offers a chance for the future for Thyssenkrupp and for jobs in North Rhine-Westphalia.”

The restructuring will lead to the loss of around 4% of the workforce, with 4,000 jobs going in Germany. Personnel chief Oliver Burkhard, in a tweet, said Thyssenkrupp would seek to avoid forced layoffs, but could not rule this out.

Kerkhoff’s reversal bowed to months of pressure from investors who have demanded more radical steps to turn around the steel-to-submarines group and realize shareholder value – in particular by floating its profitable elevators business.

They estimate the elevators business is worth 14 billion euros, twice the value of the parent, reflecting a so-called conglomerate discount that has already forced other industrials, such as Siemens and GE, to action to reduce corporate sprawl.