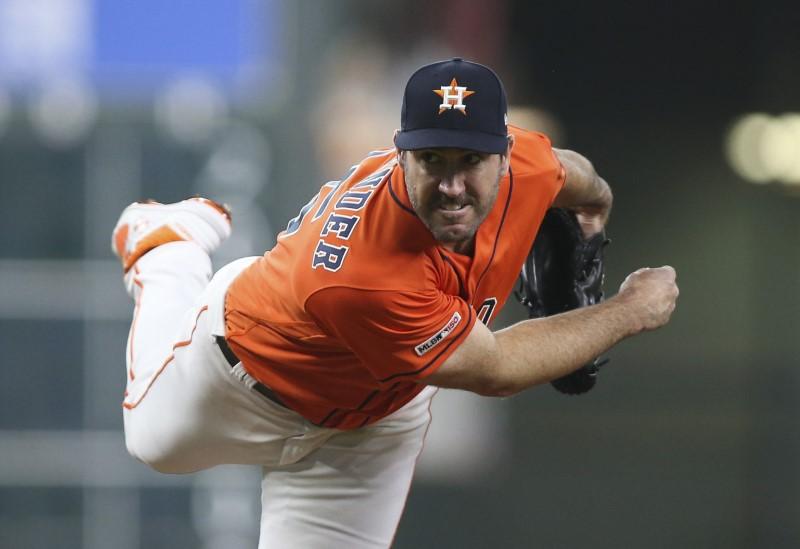 Justin Verlander allowed one hit over seven strong innings, and the Houston Astros belted three solo homers while overcoming an injury to star Jose Altuve to beat the visiting Texas Rangers 3-0 on Friday night for their third consecutive victory.

Verlander, who improved to 6-1 with a 2.51 ERA, struck out eight and yielded only Asdrubal Cabrera’s single to lead off the fifth inning as the Astros won for the sixth time in seven games. It’s the third time in Verlander’s career that he has allowed just one hit in a start against the Rangers.

However, Houston’s latest victory might have come with a price as Altuve exited with left hamstring discomfort in the bottom of the first after beating out an infield hit. The team listed him as day-to-day.

For the rest of the night, the Astros were just fine without Altuve. Jake Marisnick clubbed his third homer of the season, a deep shot to right-center in the third inning. In the seventh, with two outs and Texas starter Lance Lynn in a nice groove, Yuli Gurriel and Robinson Chirinos delivered back-to-back home runs to pad the Astros’ advantage.

Mitch Moreland hit a three-run home run and had four RBIs, and Eduardo Rodriguez (4-2) pitched seven scoreless innings as Boston moved above .500 for the first time this season with a win over visiting Seattle.

Rafael Devers went 3-for-5 with a homer and four RBIs, and Andrew Benintendi also went deep as the Red Sox won for the ninth time in their past 11 games. Boston had been below .500 since March 30 before evening its record Wednesday.

The Mariners, fell below .500 for the first time this season. Seattle has dropped 10 of its past 12.

Matt Chapman homered to lead off the 12th inning as host Oakland beat Cleveland to win for the third time in four games on the heels of losing eight of the previous nine.

Brad Hand (2-2) entered the game to begin the 12th inning and saw Chapman deposit a 3-2 slider over the wall in left field for his 10th homer of the season. The blast was the first walk-off homer of Chapman’s career.

Ramon Laureano belted a solo homer, and Josh Phegley had an RBI single among his three hits for the Athletics. Jake Bauers ripped an RBI double and scored on a double play, and Francisco Lindor had a sacrifice fly for the Indians, who have lost four of their past six.

Both starting pitchers surrendered just one hit through three scoreless innings before Braun deposited a 1-0 fastball from Quintana over the wall in center field with two outs in the fourth.

Gio Urshela hit a go-ahead, two-run, bases-loaded single in the sixth inning, and New York beat Tampa Bay in St. Petersburg, Fla., in the first meeting of the season between the teams.

The Yankees won for the 17th time in 23 games. The Rays dropped to 1-7 in one-run games this year.

Jake Odorizzi allowed just one hit over seven innings, and Mitch Garver and Max Kepler homered to lead Minnesota to its fourth straight victory, a decision over visiting Detroit in Minneapolis.

Odorizzi (5-2), the reigning American League Player of the Week after allowing six hits and pitching 13 scoreless innings in wins over the Houston Astros and New York Yankees, won his fifth consecutive start.

Jorge Polanco doubled and drove in three runs, and Garver walked three times and scored twice for the Twins, who have outscored their opponents 26-1 while winning each of their past four games.

Amed Rosario’s first career grand slam highlighted an eight-run first inning for host New York. That was more than enough for Zack Wheeler (3-2), who cruised to victory by allowing two runs over seven innings against Miami.

The first eight Mets batters reached against Marlins starter Pablo Lopez (2-5), who gave up five singles, including an infield RBI hit by Wilson Ramos, and two walks, including one with the bases loaded to Brandon Nimmo, before surrendering Rosario’s grand slam.

Ken Giles pitched a perfect ninth to earn his ninth save of the season. Justin Smoak walked four times for the Blue Jays. Tim Anderson hit a solo home run for the White Sox, who lost their third straight.

Trevor Williams allowed only one run over seven innings as visiting Pittsburgh hung on to beat St. Louis. Starling Marte’s single to right field in the eighth made a winner of Williams (2-1), who allowed nine hits but walked only one while striking out five.

The tiebreaking rally off reliever Andrew Miller (1-2) came after the Cardinals tied the score in the seventh on an infield single by Paul DeJong. The hit took St. Louis starter Adam Wainwright off the hook for what could have been a tough-luck loss.

The Cardinals had a chance to again tie the score in the eighth. They put runners at first and third with no outs against Pirates reliever Kyle Crick, who recovered to strike out Dexter Fowler, then got Kolten Wong to bounce into a double play.

Bryce Harper reached base safely all four times for the Phillies with a single and three walks. Phillies starter Jake Arrieta (4-3) lasted five-plus innings and gave up seven hits and four runs while striking out five and walking three.

Andrelton Simmons and Kole Calhoun each drove in two runs for the Angels. Trevor Cahill (2-3) earned the win with six solid innings. He did not return after rain stopped play for 1 hour, 49 minutes following the sixth inning.

Dan Straily (1-3) started for Baltimore and struggled once more. He gave up six runs on five hits in just 4 1/3 innings.

German Marquez (4-2) hit a three-run double to help back his solid outing on the mound, Ian Desmond had two of his three singles in a seven-run fourth inning, and Colorado ripped San Diego in Denver.

Trevor Story homered among his three hits, and Charlie Blackmon had two hits and scored three runs for the Rockies.

Ronald Acuna Jr. crushed a two-out home run in the eighth inning as Atlanta snapped a four-game losing streak with a victory over Arizona in Phoenix.

Acuna, hitting in the leadoff spot for the first time this season, drove a 2-0 pitch from reliever Yoan Lopez (0-1) off the batter’s eye in center field to break a 1-1 tie.

Dan Winkler (1-0) pitched a scoreless seventh inning for the win after starter Julio Teheran gave up one run in six innings. The Diamondbacks managed only four hits off four Atlanta pitchers, including Luke Jackson, who recorded his third save.

Luis Castillo was handed an early four-run lead for a second consecutive start, and this time he responded with six shutout innings, pitching Cincinnati to a victory at San Francisco.

Nick Senzel lashed a two-run triple to highlight a four-run second inning, which turned out to be more than sufficient offensive support for Castillo (4-1) and three relievers.

All four runs in the second off Dereck Rodriguez (3-5) came with two outs and were unearned, following a botched fly ball by left fielder Tyler Austin.

Maeda walked two and struck out six one night after the Nationals rolled to a 6-0 victory to end Los Angeles’ 10-game home winning streak. David Freese added a two-run home run in the seventh inning.

Pederson’s home run in the first inning was his 14th as his team’s first batter of a game. The left fielder hit another solo shot in the fifth.