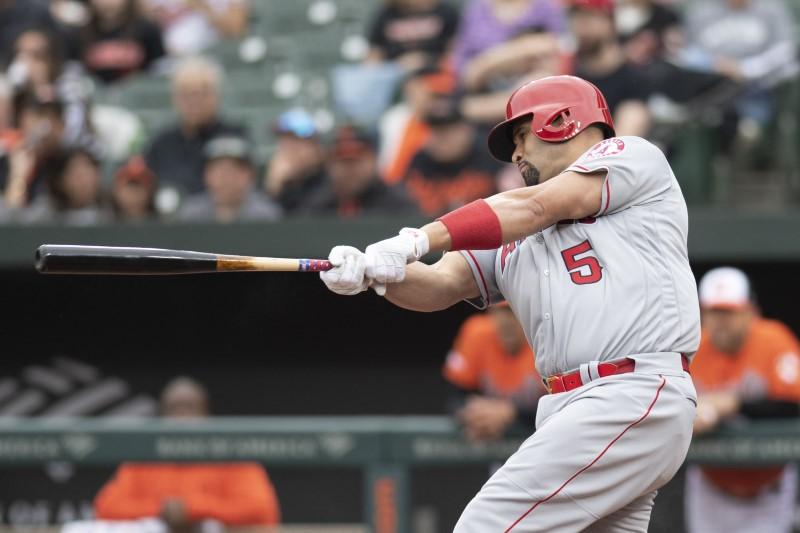 It was the 59th career multi-homer game for Pujols, who homered in the first and fourth innings, and his first since July 12, 2018, against Seattle. He was 3-for-5 with three RBIs and three runs.

The two homers and a single gave Pujols 3,110 career hits, tying him with Dave Winfield for 22nd place on the all-time list.

Contreras crushed a shot estimated at 424 feet into the left-field bleachers at Wrigley Field for Chicago’s third walk-off victory since Tuesday. The Cubs have won 11 of their past 13 games.

Gerardo Parra hit a grand slam with two outs in the eighth inning to rally visiting Washington past Los Angeles.

It was the first hit in a Nationals uniform for Parra, who signed with Washington on Thursday after he was cut loose by the San Francisco Giants earlier in the week. It was just the second home run of the season for Parra and eighth in his last two years.

Mitch Moreland also homered, and Rafael Devers and Jackie Bradley Jr. each had two RBIs. The Red Sox have won a season-high four straight and 10 of their last 12, outscoring opponents 89-34 in that stretch. The Mariners lost for the 11th time in their past 13 games.

Yandy Diaz homered twice and drove in a career-high four runs as Tampa Bay beat New York in St. Petersburg, Fla., just the seventh loss in 24 games for the Yankees.

Diaz hit a solo homer in the third off CC Sabathia and then drove in Tampa Bay’s final three runs with a drive off Nestor Cortes with two outs in the eighth.

Jonathan Holder (2-1) took the loss, while Ryne Stanek pitched two scoreless innings as the opener for the Rays before giving way to Yonny Chirinos (5-1).

John Hicks hit a tiebreaking solo home run in the ninth inning, and Detroit opened a doubleheader in Minneapolis with a two-run win.

Ronny Rodriguez hit two home runs, and Brandon Dixon also homered for Detroit, which won for just the second time in its last 11 meetings with Minnesota.

Joe Jimenez (2-1) got the win despite giving up a tying homer to C.J. Cron in the eighth. Shane Greene picked up his American League-leading 14th save by pitching a scoreless ninth.

Cron had four hits, including a three-run homer, and Marwin Gonzalez also homered as Minnesota earned the split.

Eddie Rosario finished with three hits, and Byron Buxton and Gonzalez each had two hits for Minnesota, which improved to 11-2 following a loss.

Kohl Stewart (1-1), making his sixth career start and second of the season, picked up the win, allowing three runs on six hits and two walks over six innings. He struck out two. Left-hander Gregory Soto, called up from Double-A Erie, took the loss in his major league debut. The Tigers’ 2017 Minor League Pitcher of the Year allowed seven runs on nine hits and two walks in four innings, striking out one.

Jordan Lyles allowed one run and one hit in six innings, and visiting Pittsburgh quieted St. Louis’ bats for the second straight day. Lyles (3-1) struck out six and walked three while lowering his ERA to 2.09.

Starling Marte led off the fourth with a single and then came home when Gregory Polanco hit a line drive that got through the right-center field gap and rolled to the wall for a triple. Josh Bell followed with a single to center, scoring Polanco for a 2-1 lead and extending his hitting streak to 11 games.

The Mets won their second straight in a stretch of 16 straight games against sub-.500 opponents. The Mets also won consecutive games for the first time since April 22-23 and improved to 5-0 this season against Miami.

DeGrom (3-4) held the Marlins to one run on five hits. He struck out eight, walked one and threw 78 of 106 pitches for strikes to win his first start since winning at Miami on April 3. He retired 11 of the final 13 hitters he faced.

Yolmer Sanchez homered and had two RBIs, James McCann had four hits and an RBI and Ivan Nova pitched into the seventh inning as Chicago won at Toronto.

Nova (2-3) allowed five hits and one run in six-plus innings to help the White Sox snap a three-game losing streak.

Randal Grichuk homered and tripled for the Blue Jays while Toronto starter Marcus Stroman (1-6) allowed eight hits and four runs (three earned) in 6 1/3 innings — though he complained to manager Charlie Montoyo when he was removed from the game.

Ramon Laureano’s bloop single to right field scored Matt Olson with one out in the ninth as host Oakland edged Cleveland.

After retiring the side in the eighth inning, A.J. Cole (0-1) promptly issued a leadoff walk to Olson and a single to Kendrys Morales in the ninth. Stephen Piscotty’s sacrifice bunt advanced the runners, and Laureano’s bloop single off the end of the bat to shallow right field plated Olson for the Athletics’ second straight walk-off win.

Oakland closer Blake Treinen (2-2) entered Saturday’s game in the ninth having recorded 32 consecutive scoreless innings at home, but that streak came to an end after Leonys Martin’s single to left plated Jordan Luplow to forge a tie at 2. Cleveland had been 0-for-11 with runners in scoring position prior to Martin’s single.

Zach Eflin scattered four hits to record his second complete game in three outings and second career shutout as the Philadelphia rolled to an easy win in Kansas City.

Rhys Hoskins and Andrew McCutchen each drove in a pair of runs, and Maikel Franco and Cesar Hernandez had RBI singles as the Phillies collected their ninth win in their last 13 games.

Eflin (5-3), who struck out seven without walking a batter, benefited from 14 ground-ball outs to post his fourth career complete game. He also went the distance on April 28, allowing one run on seven hits in a 5-1 win over Miami.

Charlie Blackmon’s homer off Craig Stammen (4-1) in the eighth tied it at 3, but the Padres rallied in the ninth off Wade Davis (1-1). Myers started things with a one-out single before Davis walked the next two to load the bases.

Garcia hit a grounder to second, but Garrett Hampson’s throw home was late. San Diego closer Kirby Yates struck out the side in the bottom of the ninth for his 16th save.

Michael Brantley also homered, and Robinson Chirinos had two RBIs and scored twice as Houston beat the Rangers for the third straight night. The Astros, who scored 10 of their runs with two outs, have won seven of their past eight games.

Texas has lost 12 of its last 17 games. Ronald Guzman hit a three-run homer, and Hunter Pence smacked a solo shot for the Rangers, who struck out 18 times against four Houston pitchers.

Six different Atlanta players drove in runs and helped the Braves win their second straight. Gausman (2-3) pitched six innings and allowed only one run, breaking a run of four consecutive subpar starts. He gave up five hits and two walks, striking out six.

Rookie Jacob Webb retired two batters in the ninth and left after walking Eduardo Escobar. Veteran Jonny Venters, making his first appearance since April 14, earned his first save when he retired David Peralta on a grounder to end the game.

Cincinnati jumped on Jeff Samardzija in the first inning for the second time in a week, and Derek Dietrich broke a tie with a two-out RBI single in the seventh, giving the visitors a win at San Francisco.

After a solo home run by Eugenio Suarez had tied the score in the fifth, the teams played in a 4-4 deadlock until Suarez doubled to lead off the seventh against the fourth Giants pitcher, Reyes Moronta (1-3). The right-hander retired the next two hitters before Dietrich blooped a single to left-center, scoring what turned out to be the winning run.